One Day in Croatia, I Ate Here…

My favorite pizza of all time was during a visit to Plitvice Lakes in Croatia. 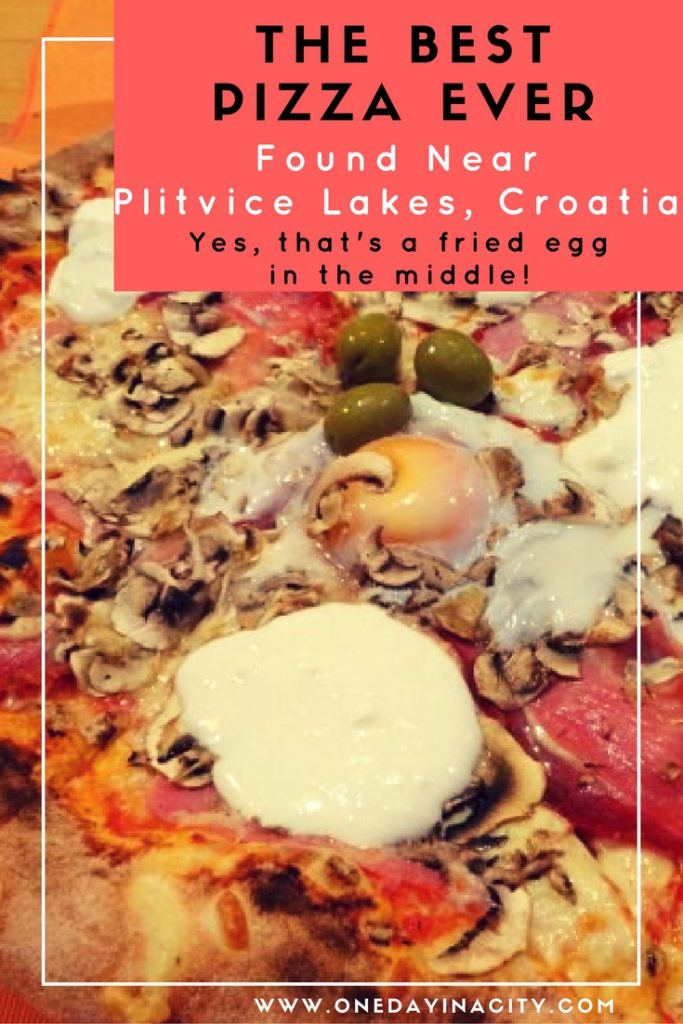 I always assumed Italy would keep the top spot for my favorite pizza. There was the olive, tomato, and arugula pizza in Montepulciano; the simple cheese pie that introduced me to Italy’s exquisite pizza in Venice; the thick savory slice to go piled high with proscuitto in Rome. Oh, so many delicious memories. Italy had the best pizza ever. Then I went to Plitvice Lakes, Croatia, where I stayed at the lovely Degenija Hotel. Turns out its adjacent restaurant, the aptly named Degenija Restaurant, has the best pizza ever.

At least if my tastebuds are the judge. And they were very happy tastebuds indeed on that warm summer night in Croatia.

The menu of Degenija Restaurant consists of a variety of salads, pastas, meat dishes and pizza. After eating goulash, seafood, and a variety of other chunks of succulent meat while traveling through Eastern Europe for the past few weeks, Mom and I decided to opt for a simple pizza and went for the namesake pizza, the Degenija.

There was nothing simple about this pizza.

It came topped with a salty cheese and piled high with tomatoes, ham, green olives, mushrooms, sour cream and an egg. The secret to its blissful tastiness was in the last two ingredients. The egg was plopped on the middle of it sunny side up. Dollops of the cream — which was milder than the sour cream we’re used to in the states — were placed around the pizza in a quarterly fashion. When we spread the cream and egg yolk around to each slice, the pizza was elevated into a saucy masterpiece. The tang from the cream and the mild butteriness of the egg yolk mixed with the traditional red sauce to create a sweet and savory cream that was so delicious mom and I went back the next night and had it again.

Both nights, it was seriously the best pizza I have ever had.

The next night we also decided to split a bottle of wine instead of just getting a glass each.

I studied the menu and noticed there was a 2 liter symbol next to the cheaper bottles of wine.

“The cheaper bottles look like they’re the larger ones. I must be reading it wrong.”

“I’m sure it’s not really 2 liters. It’s too cheap to be,” I decided and ordered the bottle when the server arrived.

I forgot that wine in Europe really can be that cheap.

Mom and I both burst out laughing when a monster bottle of wine arrived.

Needless to say, Mom and I had a lot of fun that night!