Discovering the Elusive Airplane Bathroom Changing Table and Other Tips 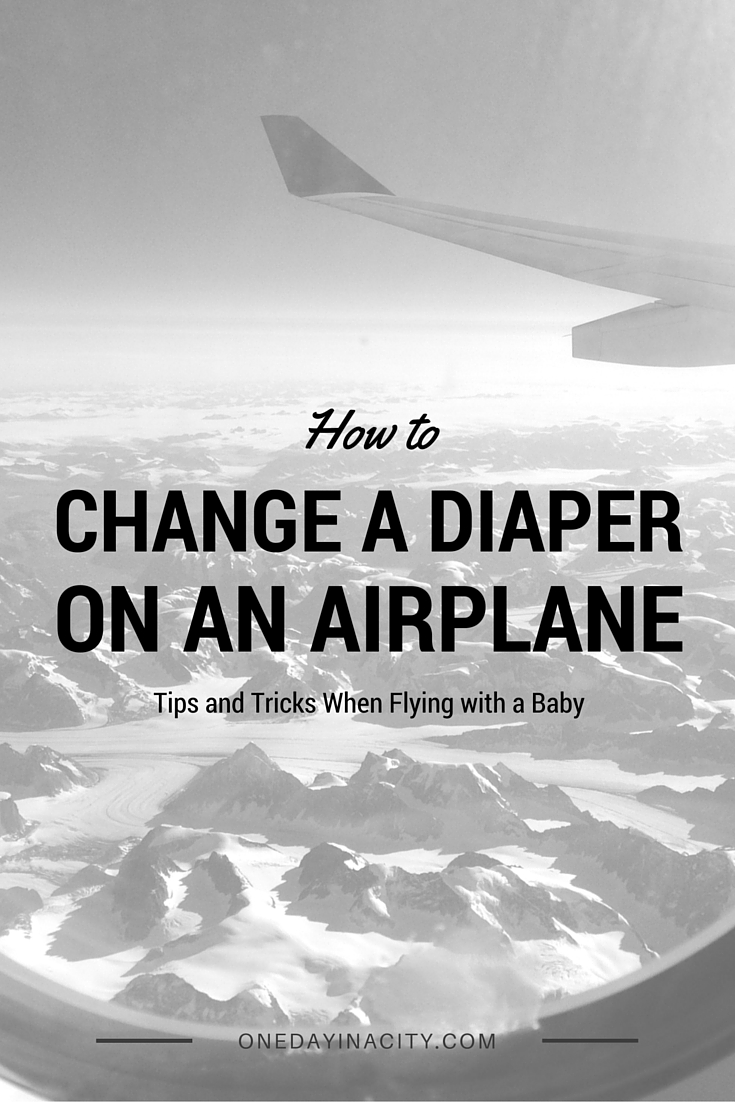 The first time I changed a diaper on an airplane, it was simple. Lulu was four and a half months old and still small enough to easily fit on my lap and so I went into the tiny bathroom, put down the seat and sat on the cover and laid her on my lap. Plus, after a smell test, I was pretty certain this wasn’t going to be a poopy diaper so I felt safe that I wasn’t going to end up with poop all over me. Instead of bringing in the diaper bag, which would have taken up half of the bathroom, I put my Maya Wrap around me with a diaper and wipes in the pocket. I quickly and easily changed the diaper.

The second time I had to change a diaper on the airplane, I knew without a doubt we had a smelly, messy one on our hands.

Lulu was now 5 months old and had just gone through a growth spurt and was becoming quite a squirmy little thing whenever I laid her on my lap.

“I guess I’ll try it on my legs again,” I said doubtfully to Tom (who was only getting out of this parenting duty because I wanted to get myself comfortable changing diapers on an airplane) and regretted not bringing a change of pants for myself.

“Why don’t you just use the changing table?” Tom replied, puzzled.

“The changing table in the bathroom.”

“Airplanes don’t have changing tables in the bathroom.”

He seemed quite certain. I was quite confused. I’ve spent many a cramped time in airplane bathrooms. How had I never noticed a changing table? And was there one when I changed her on my lap and I was just too preoccupied – or sleep-deprived — to notice?

So off I went to the bathroom with the baby and diaper bag to see if this changing table existed. (With Tom in tow so I could hand off the baby when she was done being changed and use the bathroom myself. I wasn’t ready to figure out how to use an airplane bathroom while holding a baby yet.)

And…it did indeed exist! The changing table was right above the toilet and folded down above it. I placed the diaper bag on one end and still had room to lie Lulu across it.

One tip: change the baby with your legs spread eagle so they don’t push up against the edge of the probably not clean toilet.

I changed the diaper with no issues, then opened the door and gave Lulu to Tom and snapped the changing table back up. And I wondered… why does everyone act like changing a baby on a plane is so complicated if there is a changing table in the bathroom? Then figured…probably because what I had just witnessed was not the norm. There’s no way I had really not noticed changing tables in airplane bathrooms before, was there?

When we landed I consulted Google. Sure enough, the changing table in the bathroom was a fairly new phenomenon and we were lucky to have one on the American Airlines flight we were on to Kauai. Trips with Tykes’ Airplane Changing Tables blog post has a handy list of airlines on which you can expect to find this super helpful parenting tool, and the article is a few years old so there may be even more now. Still, they’re not on all planes yet so there’s still a long way to go.

Each time you fly, scope out the bathrooms before take-off or ask a flight attendant if there are changing tables in the bathroom in order to fully know what your options are.

On our next flight, there were no changing tables (Alaska Airlines – which supposedly does have them on some of its planes). Luckily, it was just a two-hour flight and Lulu didn’t require a change. I may not be so lucky next time and hope whatever plane I’m on has a changing table otherwise I’m sure I’ll be doing some major disinfecting upon leaving the bathroom.

Do you have any tricks and tips for changing diapers on a plane?