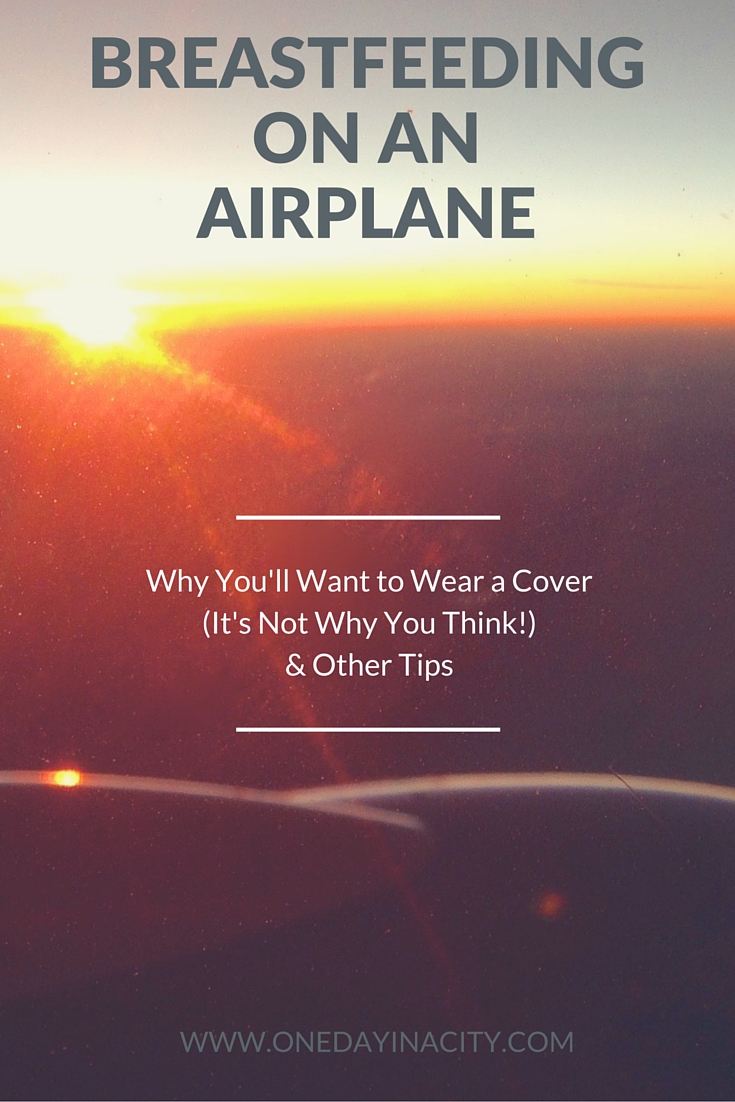 I’m a big proponent of breastfeeding when flying if nursing is an option for you because I think it’s simply easier. Why? Well, for starters, you’re already carting enough extra stuff through the airport when traveling with a baby that you shouldn’t add to it a pump and bottles of breastmilk. Plus, then going through security will take longer since the agent will need to test the breastmilk or the pump might trigger the x-ray machine and your bag has to get searched. I know some women strictly pump and that’s totally ok, and this point isn’t for you -– this is for the woman who usually nurses via the boob, but might feel self-conscious doing so in close quarters on a plane. I’m here to tell you: don’t stress about it.

I’ve nursed on every plane ride I’ve been on with Lulu, most of which have been solo, meaning I’ve sat next to men who were strangers while nursing and have had Lulu suction cupped to my boob for hours so she’ll stay sleeping (and I can actually read a book) and it has never been a problem. I have one preference and one requirement when nursing on an airplane, though.

Window or Aisle when Breastfeeding While Flying? My Preference is Window

My preference when flying with a baby who is nursing is to have a window seat. Here’s why: with a window seat, I can put my back to the rest of the aisle while I get her latched and situated, which I do on the breast that is closest to the window. I always check which side of the plane I’ll be sitting before boarding so I can nurse her with the other boob before boarding the plane and deplete that one. If it’s a long flight and depending how old your baby is, you’ll probably need to eventually nurse out of both sides so the one side doesn’t get too uncomfortably full, but by then hopefully you’ll be feeling more comfortable about the whole “breastfeeding on a plane” thing.

Once she’s latched, I position her legs so they go in between mine and still keep my body turned very slightly while resting my elbow on the armrest by the window. I’m able to usually get pretty comfortable this way and, as Lulu has gotten older, don’t have to worry as much about Lulu’s legs hitting the person sitting next to me.

Also, by being by a window you won’t have people walking by you in the aisle and potentially being able to peer down on what you’re doing, in case that makes you uncomfortable, or accidentally hit your arm that’s balancing the baby’s head in the right position — or bump the baby’s head!

Here’s Why You Want to Use a Nursing Cover. It’s Not Why You Think.

My requirement for breastfeeding on a plane is flying with a nursing cover that won’t easily budge. My first flight with Lulu, I nursed just covering her with the wide end of my Maya Wrap ring sling. This was almost a mortifyingly bad idea.

Nursing seemed like it was going fine. I had her lying sideways in the wrap so I could have one hand free while still having her positioned well. I’d made a bubble around Lulu’s head with the fabric of the wrap’s tail, which afforded me some privacy. I was even actually beginning to feel a bit relaxed and was starting to think of myself as quite the breastfeeding pro.

Well, the minute you start to feel even the slightest bit smug in mothering, something is bound to happen to correct that sentiment I’ve learned. Lulu chose that moment to suddenly pull the wrap off her head while somehow simultaneously hitting the bottom of my boob with her little hand. Before I could comprehend what was happening, a stream of breast milk suddenly spouted upward. I quickly pulled my tank top back up over the out-of-control nipple and proceeded to nearly die of a heart attack.

I was in an aisle seat and Tom was across the aisle from me (we booked our flights to Kauai too late to get seats right next to each other) and he saw the whole thing happen and…started laughing. Such a helpful husband. I was too appalled to look at the people to my right, sure they were fainting in shock from being sprayed with breast milk. Panicking, I mouthed “did they see?” to Tom. He shook his head, still laughing. I turned my head and took a hesitant peek.

Luckily, the people next to me, who seemed like they were on their honeymoon, were staring out the window with clasped hands and murmuring lovey dovey things to each other, as they had been doing for most of the flight. And also luckily, the errant breastmilk only got on me, Tom confirmed.

Seriously, milk production can be crazy in the beginning to the point of being reminiscent of a Katy Perry video so save yourself the worry of embarrasment and wear a cover that can’t be easily grabbed off by bored little hands.

I now nurse on a plane with a lightweight muslin nursing cover that has a strap that goes around my neck so it stays put and also pushes the fabric away from Lulu’s head so she doesn’t get annoyed by it. It gives me privacy and shields any crazy milk let downs. (If you’re new to breastfeeding, rest assured that powerful let downs tend to diminish by quite a lot as your baby gets older and starts eating more solid foods and breastfeeding less.) My cover is the one thing I make sure is in my diaper bag before heading to the airport. Along with diapers and snacks. And a change of clothes.

A cover is also nice on the airplane because it helps shield the baby from some of the ambient light if my neighboring seat mates have their reading lights on.

And if all goes well, Lulu falls asleep from some well-timed breastfeeding right before the flight attendant arrives (coffee please!) and I get to enjoy a little book reading (finally!).

What are your best breastfeeding on a plane tips? If you’re a nursing mama about to embark on your first flying with baby adventure, what are you most anxious about? Share below!