I don’t often stay in hotels that strike me as sexy. Romantic, yes. Trendy, maybe. But sexy? It’s just not an adjective that often pops into my head when reviewing hotels. But that all changed with my stay at Buddha-Bar Hotel in Budapest, Hungary. It oozed sexy in a super sophisticated way.

Buddha-Bar Budapest is located in an old, stately building dating back to 1902 when it was known as Klotid Palace. It is a great place to stay if you only have 24 hours in Budapest since it is centrally located in downtown Budapest and close to the city’s major sites.

Inside Buddha-Bar Hotel Budapest, though, it’s all modern with a large, welcoming – and air conditioned (you’ll be very glad of this in the summer months) – reception and lobby. The entire hotel has an Asian design heme, which I thought might seem out of place in Budapest, but it’s done so tastefully and luxuriously that it works.

Beyond reception, dim halls with red walls and backlit numbering led me to my room.

Inside my room, crimson walls and mahogany furniture greeted me. A large sumptuous bed with soft sheets beckoned me to put up my feet after a tiring day of travel. 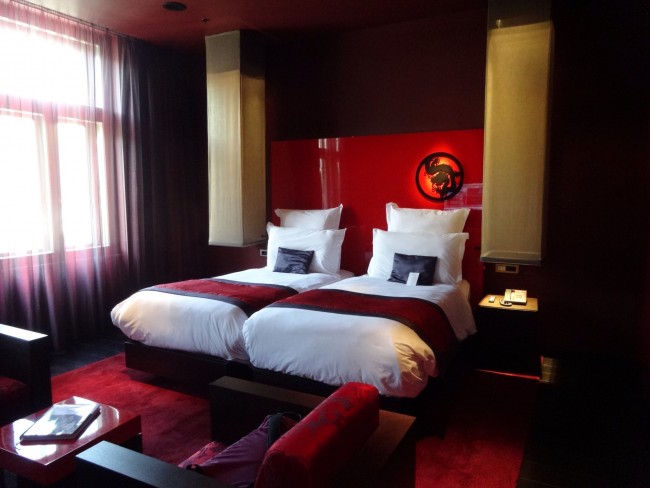 The bathroom was excellently appointed with a large walk-in shower.

However, my bathroom didn’t even compare to the seductive tub and shower of the junior suites, one of which I got the opportunity to tour. A massive square tub was framed above by a waterfall shower head.

The junior suites also have an interesting division of living and bedroom space as there was a wall divider separating the two areas with – get this – a TV on top that rotated depending on which part of the suite you were in. I thought it was quite cool and yes, still sexy – after all, you can’t be separate from your significant other and watch two separate shows if there’s only one TV. You’ll have to cuddle up either on the bed or on the couch and spin the TV accordingly.

In the center of the hotel is a Zen garden in the Japanese style with only rocks. Guest can sit in the garden to find some peace and harmony, though even just seeing the garden from windows in the hallway that overlook it are enough to immediately calm you a bit before you head out onto the bustling streets of Budapest.

Buddha-Bar Hotel Budapest hotel is right next to Ferenciek tere metro so you’re an easy jaunt away from the top sites of Budapest. It’s also only a 15 minute walk to Chain Bridge and the sights of Old Town.

Buddha-Bar Budapest is an ideal place to stay in Budapest for honeymooners or couples vacationing to the city together. Although, I was traveling with my mom and we had a lovely stay there so family and friends will enjoy it too. Everyone could use a bit of sexy decor in their life now and then.

Writer’s Note: I was a guest of Buddha-Bar Budapest and received a complimentary stay, however all opinions and reviews are — as always — my own.