Things to Do in Marienplatz, Munich’s Famous Main Square (with Video of the Glockenspiel Performance!)

Marienplatz square is the focal point of Munich’s city center. I immediately loved Marienplatz’s vibrant energy derived from the shopping and restaurants lining its perimeter, plus the historic buildings that stately stood in the square.

Even if short on time when visiting Munich, I recommend making time to see Marienplatz and focus on these four aspects of it: New Town Hall, Old Town Hall, the Column of St. Mary and – my favorite part – the Marienplatz clock called the Glockenspiel, which houses motorized figurines and which I included a video of below.

Marienplatz’s Glockenspiel: Dancing and Jousting and a Cuckoo Clock Bird

The Glockenspiel was what I was most excited to see in Marienplatz. It just sounded so darn charming. The Marienplatz Glockenspiel times for its performance are at 11 a.m., 12 p.m., and 5 p.m. (the 5 p.m. performance doesn’t occur from November through February) every day.

The performance includes motorized figurines that dance, joust, and twirl around the inside of the tower. The performance lasts 12 minutes and ends with the chirp of a cuckoo bird coming out above the display. When planning my time in Marienplatz square, I knew I had to see the performance and not just the clock itself, so I arrived early for the 12 p.m. performance.

One nice thing about showing up to see the Glockenspiel performance if short on time in Munich is that it’s very high and since Marienplatz is so wide you don’t need to get there super early to get a decent spot to view the spectacle.

I arrived about 20 minutes beforehand and a crowd hadn’t even started yet. This meant I got to be front and center, but off to the side a bit would have still had a decent view, too, so getting there five to 10 minutes early would likely have been fine.

Right at 12 p.m. the Marienplatz Glockenspiel fun began as the Glockenspiel’s intricately painted and detailed figures began to circle around inside the tower.

Here’s a video I took of the Glockenspiel, too, which showcases what the performance is like.

The Glockenspiel isn’t all you’ll find in gorgeous Marienplatz square.

When we first arrived in Marienplatz, I thought New Town Hall must be Old Town Hall until I consulted my map, since it looks more elaborate and ancient. New Town Hall appears formidable and Gothic, and was built at the end of the 19th century.

New Town Hall houses Munich’s city council, mayor’s office, and the headquarters of the city administration. Its intricate tower is also home to the Glockenspiel and can be visited via an elevator for views of the city. Touring the inside of Old Town Hall provides the opportunity to see some more of the Gothic revival architecture style, of which I was most intrigued by the cool geometrical staircase.

Built in the late 1400s, Old Town Hall stands tall in Marienplatz. Though the outside isn’t overly impressive compared to some of the buildings around it, Old Town Hall is still a pretty, white-washed building with its own little tower capped in orange.

The 180-foot tower can also be visited for great views of the city of Munich. The tower also has historical importance as it was built prior to the rest of the town hall and was originally part of fortifications built to protect Munich.

The Column of St. Mary in Marienplatz Square

In the middle of Marienplatz square there is also a hard-to-miss statue constructed after the end of the Thirty Years’ War. The statue stretches vertically high into the air on a column and is flanked by four additional statues at the base. The elevated golden statue is the Virgin Mary, and thus this statue is often referred to as the Column of St. Mary, though its official name is Mariensäule. The four figures at the bottom surround the column on the corners and signify Munich overcoming heresy, hunger, pestilence, and war.

Do Some Culinary and Retail Therapy in Marienplatz

While it’s fun to see the top sites of Marienplatz, another one of the most fun things to do in Marienplatz is visiting one of its many restaurants or shops. You can find some al fresco dining all around the perimeter of the square. Once you’ve filled up on some local cuisine, there are a variety of shops to browse through, from traditional souvenir-style shops to high-end boutiques and tech stores.

Getting to Marienplatz Square

If you’re trying to figure out how to get to Marienplatz, Munich makes it quite easy.

Marienplatz square is centrally located in Munich’s city center and is easy to walk to if you’re staying nearby, or you can just hop on the metro and take it to the (easy to remember) Marienplatz station, which most of the metro lines stop at. 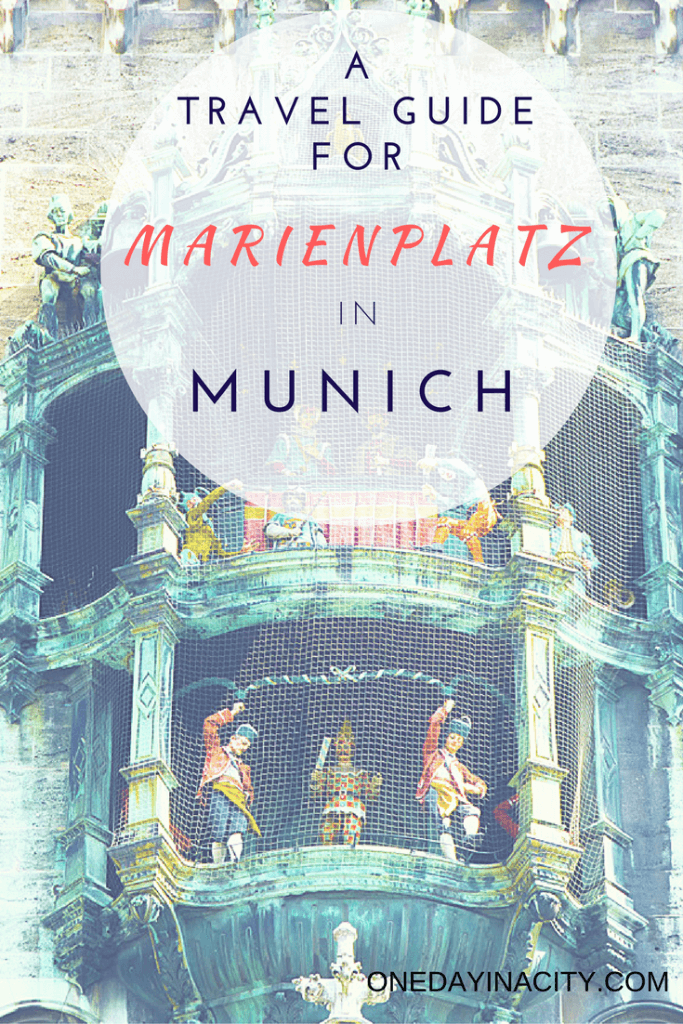