It wasn’t supposed to be.

I was going to leave the forts for last, figuring I’ve seen enough forts in my travels that with one day in San Juan, it wouldn’t be the end of the world if I missed them.

Well, thanks to my poor direction skills even with a map in front of me I went the wrong way to finding San Juan Cathedral and ended up in front of Castillo San Cristóbal Fort. Since I was right there I figured I might as well go in – and as soon as I did I realized that missing the forts of San Juan is skipping out on a huge chunk of history and the essence that San Juan was built upon.

The first thing that struck me about Castillo San Cristóbal Fort (after the extremely affordable $3 entry fee) was how stunning its real estate is. The fort is right on the tip of the land, the ocean waves of the Caribbean beating up against the walls and grass making up the outside of the fort.

Every room I went to in the fort I could hear the sound of waves. Some rooms it was distant and in others – including the rooms where the soldiers would sleep at night – it was thunderous. As a person who finds waves soothing, I thought maybe they did that on purpose. The waves blocked out all the other noises and let the soldiers get some rest.

What especially gave me a “wow” moment at San Castillo Fort was when I learned that the fort had last been used in WWII. I’m used to visiting historic places that haven’t been actually used in centuries and here was a place that had been used 70 years ago – that our fathers or grandfathers or great-grandfathers could have slept in. That felt astounding to me. This wasn’t just an artifact or a piece of history – this had an actual military use in the lifetime of people still alive today.

The history of Castillo San Cristóbal Fort goes back farther than that though. At one point, it, along with the original San Juan fort – San Felipe del Morro, was the city of San Juan. Puerto Rico was the first Caribbean island to have a decent harbor to sail into, plus it was in between Europe and America and was considered the gateway to “The New World”. Therefore, Spain did not want to give up this piece of paradise and kept it well guarded. Spain was hesitant to expand beyond the walls of the fort, wanting to keep everyone safe and in a fortified bubble. Eventually, in 1865, the allure of the Caribbean land won and the first settlement outside the fort walls was established. From there San Juan grew into the colorful city it is today.

Every aspect of the fort was built for protection – of the Spanish soldiers and the island. There were many components that went into the fort to succeed at this.

One was the series of six tunnels, referred to as galleries, meandering through the fort.

These tunnels crossed levels and made it easy for soldiers to quickly escape from gunfire and move to new positions unseen by the enemy.

The fort also had many lookout points for soldiers to watch for the enemy and to hide between while firing rounds of ammunition. 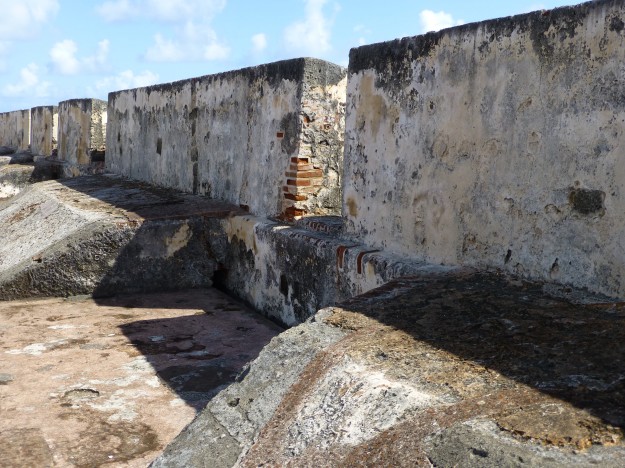 In addition to the remnants of war and fortification, Castillo San Cristobal has some more serene moments when walking through it:

Even if you’re not into history and warfare, a walk around Castillo San Cristóbal is worth it just for the stunning views.

These views and the history is why I recommend Castillo San Cristóbal as a must-see site when visiting San Juan, Puerto Rico.

Visiting San Juan during a cruise? You’ll also want to read my post: What to Pack for a Caribbean Cruise